Ryan White is working towards his seventeenth year as an Audio Engineer.  In 2011, Ryan graduated from Arizona’s Conservatory of Recording Arts and Sciences before relocating to Los Angeles. Once in Los Angeles, Ryan worked for composer Klaus Badelt, and drum software developer, Steven Slate.

Ryan has been an Audio Engineer in all major areas of the industry, from film production to video game audio.  He has regularly recorded music in his free time, which quickly expanded into recording and editing podcasts as a freelance engineer with the ever-rising popularity of podcasts.

Ryan has since become a Product Specialist for Rode Microphones where he travels the United States training and educating the Music Industry, Podcast Industry, and Film Industry on all Rode Microphones’ product line. 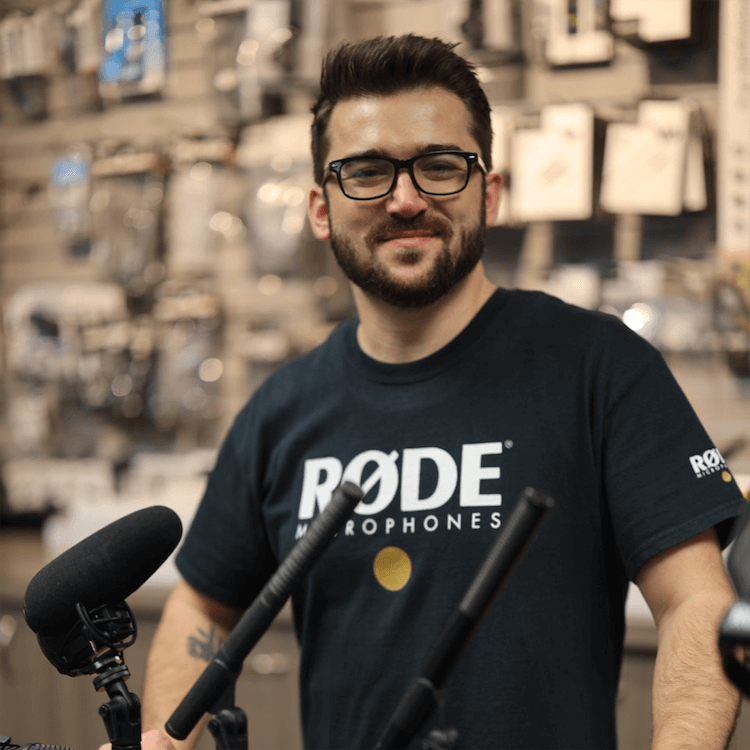 Hey Ryan, Thanks so much for jumping on. I want to take the focus away from mics as a starting point as I’m sure you’ll get a lot of those technical questions. I’m interested in knowing what you think makes a successful podcast, other than choosing the right gear?

Other than choosing the right gear, you can never overlook good content. I have listened to so many podcasts from friends or pros that were in pretty terrible shape, but the content was so good that I stayed in. It sort of goes against all the things we know about audio and its importance, but hey, it’s true!

I start with the room! Dynamic, Cardioid patterned microphones are always a huge help, but the room will always sneak in.

After the room sounds fairly controlled, I prefer a good, average setup. In my classes I always teach a healthy average over anything else.

Example: Rode AI1, Rode PodMic, Rode Tripod, and some solid software (I use Pro Tools)
Example 2: Zoom H5, SM58 (be sure to have a foam pop filter), stand, shockmount

Hey Ryan — how much do you recommend beginner podcasters invest in gear? Can you over invest?

You can never over-invest! However, I know people that buy things they simply don’t need or out of order.

A healthy average in gear is better than buying that one “magical” piece. I know too many people buying Neumann U87s at $3500 and plugging them into bad preamps. They simply turned that wonderful microphone into a bad sounding microphone all because they didn’t complete the setup.

If you keep this in mind all the way through your signal flow, no matter the budget, you’ll sound just fine!

You can never over-invest! However, I know people that buy things they simply don’t need or out of order.

A healthy average in gear is better than buying that one “magical” piece. I know too many people buying Neumann U87s at $3500 and plugging them into bad preamps. They simply turned that wonderful microphone into a bad sounding microphone all because they didn’t complete the setup.

If you keep this in mind all the way through your signal flow, no matter the budget, you’ll sound just fine!

Hello Geoff,
I like this question, as it really is half of what we do in the podcast world, and I’m probably being too nice on that estimate also.

Nothing can replace recording it well. I know everyone feels that it’s faster and easier “in post,” but I’d like to change that feeling. Truth is, we end up spending two to three times longer in post correcting what could have been re-recorded. I prefer the marker approach, where you physically clap your hands right into the mic and you see a very loud transient in the software. Then re-record that part from there out. It takes two seconds to remove in post and you’re on your way. This also works with software/hardware that has markers inside of it. Obviously, if you’re live, you have to have good experience and decent gear.

Final note here, is that nothing can replace experience in sounding comfortable, having good microphone technique, and having good content.

Which industry area have you preferred working in most, Ryan? You’ve got a very diverse background!

I agree. I do! I’ve loved every one of them, and funny enough, each has made me a little better in so many different things.

My favorite has always been “tracking,” as we call it in the music industry. That’s the recording phase. Recording Engineers are always the forefront of making anything sound good, and it tends to be quite experimental and artistic as well. If this stage is messed up, it’s never fun fixing it later. So, it’s also quite important.

I was able to get a lot of experience doing this with Steven Slate for a lot of his sample libraries and worked with some amazing engineers at the same time.

Shout out to my Live Sound experience too. I was at an arena for 3.5 years and it’s amazing how much you can achieve and learn under pressure. Both have really sharpened every skill I have in Audio Production.

Hey Ryan. Any tips for recording with multiple guests in multiple locations?

I understand that this is pretty vague, but it can go a long way if you get your guest(s) into a decent room with individual microphones. It can simply be their earbuds with a microphone attached, in a controlled environment, over a good “voice over ip” app. Line and Slack are two apps that Rode recommends.

The software you use to bring everyone together is also important. Look into the types of compression, file conversion, and delays, and etc. Most of the “podcast” labeled software out there handle this well.

What free & paid editing/recording software do you recommend for podcasters?

I have always been a Pro Tools user, as it mimics an old school audio mixer the most. I have also been trained on it the most throughout my career. You must always know your shortcuts and software as best you can. In my classes, I simply say “know where the button is”.

PT is more expensive and/or subscription-based, and it is not a platform for distribution either. So, keep those in mind.

Free “audio software” to compare with PT would be the likes of GarageBand (it has gotten so much better), Reaper, and Audacity. However, all of these, I personally feel, are slightly clunky in both their look and arrangements. Nothing you can’t get around with more experience.

Zoom Video Communications is what I have used with others while adding video. Hope this helps.

Please confirm the best email address to send the instructions to. If you encounter any issues, please email the details to [email protected]om.