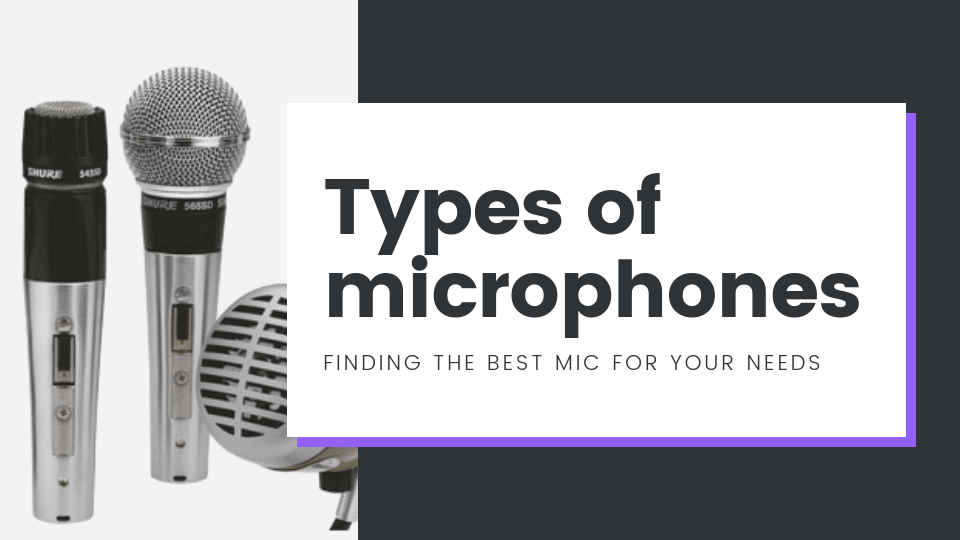 When one hears about a microphone’s classification, they typically think about condenser microphones and dynamic ones.

Everything from design to set up can make the difference between the right and wrong microphone, but once someone has settled on either a condenser or a dynamic microphone, there are some other terms which they should be acquainted with.

In this guide, WhatPods will help you pick the right type of microphone for consumers with regards to the ways in which they’ll pick up your voice, your instrument, your interview subjects, or whatever else you are hoping to record for your podcast.

Some are ideal for certain podcasting scenarios, while others have little use for the medium, so it is important to know the difference between a figure 8 and a cardioid design, an omnidirectional or a super cardioid.

Each type of microphone has its purpose in one way or another. Make sure that the one you choose has a purpose which aligns with what you are recording.

It is important to understand just what kind of noise you are expecting to record throughout your room and remember that the polar pattern–the area of sound which the microphone picks up– is not just a two-dimensional plane which sound comes from, but a three dimensional one which can pick up an entire room from the floor to the ceiling.

In the world of podcasting, this omnidirectional sound isn’t typically the type you are looking for. Because of this, we will cover every type so that consumers know precisely what to expect when they see these words and can decipher whether or not this microphone is right for them.

What Does This All Mean?

The recording industry covers so much ground from radio, to film, from voice-acting to music, and finally to podcasting.

Because of this, there are special tools for every type, and while some equipment may be perfect for a documentary filmmaker who is capturing the sounds of nature, it does not mean that microphone is right for your podcast.

At WhatPods, we have designed this list with hopes that you will know precisely what you are getting when you see strange words like “cardioid” and “omnidirectional” on your microphone’s specifications.

Where are you recording? Do you want other sounds to be picked up? What kind of sounds are there? Is there an audience that you want to drown out or pick up? Is there unwanted noise which may leak through if you get the wrong pattern?

Podcasters are most likely to use a cardioid microphone or one of its siblings. The reasoning behind this is simple–they are best at picking up the human voice.

A cardioid microphone is designed to pick up directly what is in front of it, and while there can be outside factors, such as sensitivity and power, these microphones are designed to take in only what is fed to them.

If you were to visualize what the area of sound that a cardioid microphone can pick up is, imagine putting an oversized apple at the microphone. The size of the apple will depend on the sensitivity of the microphone’s design, but the basic shape will stay the same.

Because of this, cardioids are great for home recorders who may not have the luxury of a controlled environment which is designed to keep out outside noise.

While a condenser microphone with a cardioid design might pick up some extra noise, many home podcasters will choose to record on a dynamic cardioid microphone, as they pick up less extra noise while still recording with professional-sounding quality.

As more people are looking to record from their homes, the wrong environment can still lead to their microphones picking up unwanted noise.

As the name implies, the hypercardioid has the tightest recording area. This is ideal for people who need a little bit more protection from loud ambient noise.

One thing to note on supercardioid is that there is slightly more pickup at the rear of the microphone, which could offer issues for those who are monitoring through a speaker.

In the world of podcasting, however, this shouldn’t be a major issue, and many of the top models on the market are in the cardioid family.

Shure, Audio-Technica, and countless turn to the cardioid, supercardioid, and hypercardioid family when designing their lines of analog and digital microphones.

Having what is, perhaps, the most self-explanatory name of all the different microphone types, the omnidirectional microphone is used to record noise from an entire area.

While this may not be the ideal microphone for a one-man podcast, there are situations in which an omnidirectional could prove valuable to budding podcasters.

While some microphones are just one or two people talking into a microphone, some may want to record in non-traditional spaces. This is where an omnidirectional microphone could come through for the host.

While it will pick up some ambient noise, meaning that it won’t necessarily be ideal for talks in crowded spaces, the omnidirectional microphone works perfectly for a group discussion between a group of people in an otherwise quiet room.

Whether you are hosting a band, a comedy troupe, a panel of experts, or another group of people that one or two microphones can’t necessarily pick up, this microphone will work perfectly.

The best omnidirectional microphones have no problem picking up crystal clear dialogue, and they tend to be small enough to slip in and out of your laptop case or bookbag.

Another self-explanatory microphone name, a bidirectional microphone may not necessarily fit the bill of needs for the typical podcaster, but it does have a place in the podcasting world.

Unlike a cardioid microphone, this microphones, also referred to as figure eight microphone thanks to the eight-shaped recording field it picks up from, picks up noise on both ends of the microphone.

This means that it could sit in the middle of a desk or table and easily pick up both sides of an interview, or both co-hosts with a single microphone.

While there are some reasons, such as the adjustment of sound levels to each person’s voice, to have a microphone for every person, there are a variety of reasons why a bidirectional microphone can still work great.

For one, it can be more cost-effective, although it is always a good idea to check out a microphone’s specifications before buying it based on price.

Microphones can be cheap, but they can also cost an arm and a let. Because of this, it makes sense that a podcaster, especially a first-timer would want to spend as little money as possible as they start their podcast.

Another convenience of owning a bidirectional microphone is the portability. For interviews, you are often interviewing guests who are on a time crunch at a place that is not set up for podcasting.

With a bidirectional microphone, it can be as simple as plugging your microphone into your mixer, phone, or computer and beginning to speak. Just make sure it is in a place where both of your voices can be heard without being interrupted by too much ambient noise.

The aforementioned microphones will be the most commonly used microphones for your podcasting needs, but it could be important to know what these other patterns do for microphones so that you don’t buy the wrong microphones.

While there could theoretically be a podcasting use for any microphone in existence, these microphones are typically used for other mediums, be it music and film, and those who buy them for other uses may want to make sure that there is a decent, practical reason to do so for their podcast.

Subcardioid— A subcardioid is not necessarily the ideal microphone, as the other cardioid microphones are typically better for a podcasting environment.

The subcardioid is sometimes called a wide cardioid microphone due to the wider sound field that it draws from. In a controlled environment, this may not be a big deal, but as far as microphones go, the previous options will almost always be the better option.

Lobar— The lobar pattern, which typically draws in sound from a large area for film, television, sports broadcasts, and documentaries, is typically coming from a shotgun microphone. It can pick up the sounds of whatever it is pointed at, making it ideal for sets and stadiums alike.

Half Cardioid— Don’t let the cardioid name fool you, these microphones are typically reserved for drummers thanks to their hosts typically being mounted to pick up bigger sounds.

Which Microphone Is Right?

This list was not made in order to tell you exactly what you need when you get your microphone, it was simply meant to enlighten you on the basics you may find while looking for a microphone.

Here at WhatPods, we are constantly looking out for the consumer. We know that everyone’s podcast is a unique experience which may need its own design.

When the podcasting bug is planted in your mind and you are looking for the proper microphone, remember this information and all the other information we’ve provided you throughout the site to make the most informed decision.

These words may seem like technical mumbo-jumbo that bears no difference between the microphones, but without proper knowledge of these terms, you could end up with the wrong microphone for your podcasting needs.

Don’t buy the wrong microphone. Don’t simply get the microphone that looks right based on other people’s needs. Do your research, compare your options, and figure out what is right for you!